With more than 8 years of communications experience in lifestyle and regulated markets, Jessica believes strongly in the power of collaboration. She holds genuine connections with journalists and a firm understanding of how to liaise with purpose through a good pitch. Her relationships are fundamental building blocks that she doesn’t take for granted and works fervently to maintain and nurture them.

On the creative side, she was the editorial backbone for several lifestyle blogs and has contributed dozens of articles to notable outlets and client blogs in print and digital.

Despite her anxieties around public speaking, Jessica has spoken at 3 cannabis conferences and one technology conference. She has also been interviewed on news segments for CJAD800, CBC in English and French, Toronto Life, NOW Toronto, Healthing, The GrowthOp, and Kind Magazine.

She completed her academic background in PR Management at McGill University and Political Science at Concordia.

A CBC News analysis has revealed the price of cannabis extracts varies widely across Canada, with the same product sometimes costing two to three times more in one provincially run online store than another.

The inconsistencies, experts say, could undermine efforts to wipe out the country’s illegal market.

The analysis looked at the price of 61 cannabis capsules, sprays and oils available in Ontario’s provincially run online retailer in December 2019.

Those products were then matched with their counterparts from the online provincial retailers in British Columbia, Alberta, Quebec, Nova Scotia, New Brunswick, Prince Edward Island and Newfoundland and Labrador — provinces where the government is an official distributor and runs an online mail-order site.

Manitoba and Saskatchewan have direct-to-dispensary models, where licensed producers sell directly to retail stores, without the province acting as a wholesaler.

The analysis found that for 31 of the products, the price difference between the most and least expensive province was more than 50 per cent. In some cases the exact same product cost three times more. 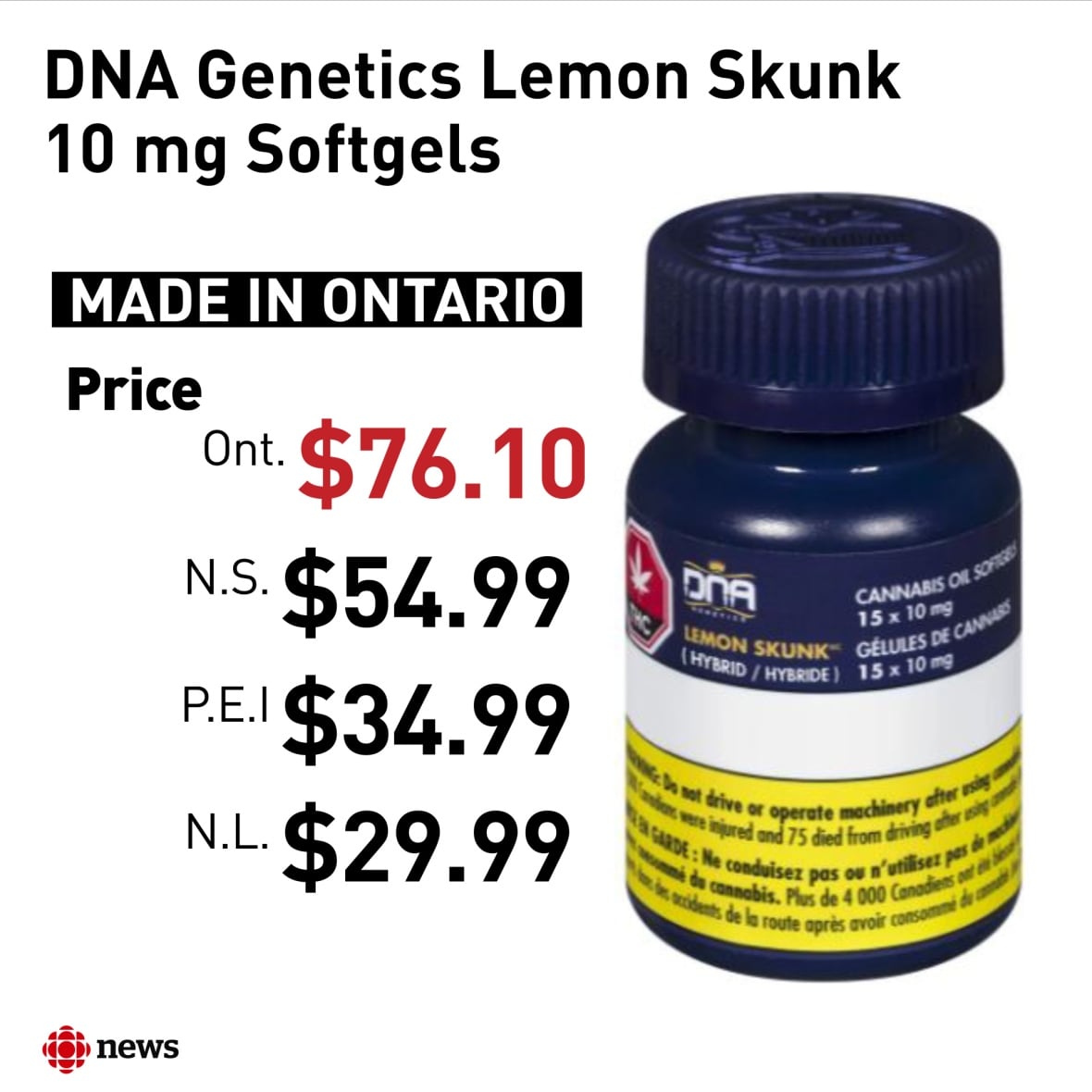 Of the 36 products sold in both Ontario and B.C., 25 are more expensive in Ontario. On average, Ontario is charging 32.5 per cent more than B.C. for the exact same product.

A similar trend emerged when CBC News compared prices between the province-run stores in Ontario and Alberta. Of the 54 products the two online stores had in common, 42 cost more in Ontario, with customers paying an average of 33 per cent more.

Cost of oils, sprays and capsules in Canada

CBC News compared the prices of 61 cannabis extracts available in provinces where the government acts as wholesaler and runs an online store.

For one Toronto consumer the price variations seem a bit fishy.

“That doesn’t really sit well with me,” said Jessica Nudo.

“I’d consider myself more of a medical consumer with a touch on the recreation,” she said.

For health reasons, Nudo prefers to consume cannabis oils and capsules instead of smoking pot. But current extract prices are so high at OCS, she says she rations her use.

She says she too has compared Ontario’s prices with the online prices in Alberta and B.C., and found Ontario’s pricing is often on “the higher end of the spectrum.”

Some price variations are to be expected, said Rishi Malkani, of financial consulting firm Deloitte, who has worked directly with several provinces during their price and supply negotiations with licensed producers.

On top of that, varying tax rates among the provinces — PST, GST or HST — could make up as much as a 10 per cent difference in the final price. Some provinces include those costs into the display price; others add it at checkout.

Provinces with larger populations could get a better deal for buying in bulk — though that didn’t seem to be the case with the two aforementioned product examples.

The location of the producer also plays an important role, said Malkani, because of transportation costs: a product made in Ontario should cost less in Ontario than it does in Nova Scotia — theoretically, at least.

However, Malkani struggled to come up with an explanation for why a product produced in New Brunswick would be most expensive in neighbouring Quebec and second-most expensive in its home province.

“The provinces are still kind of, you know, feeling out what’s selling, what’s not,” said Malkani.

They’re working through inventory from the first round of wholesale purchases, he said, and suggested some provincial wholesalers may be heavily discounting certain products.

Inconsistent pricing from province to province is detrimental to the goal of wiping out the illegal market, says Daniel Bear, a drug policy expert at Humber College in Ontario.

“One of the primary reasons the government cited when legalizing cannabis was to reduce the black market,” said Bear.

“When the prices are now wildly out of line with one another, that probably impacts trust quite a bit.”

Research on the industry — which so far has been limited to dried flower cannabis — shows customers are willing to pay a bit more for legal product before turning to the illicit market, says Bear, but the margin is small.

If the legal product is anywhere between $1 and $3 more per gram, consumers will buy it, he said.

But when they can see with a click of the mouse that the same product is selling for $10 or $20 less one province over, it makes them more likely to look elsewhere.

“The whole basis of this system needs to be built on the idea that you can trust that a legalized product is fair, it’s coming from good sources and you’re not being price-gouged just to fill the coffers,” Bear said.

One of the reasons for higher prices in Ontario is the province lost $42 million in its first five and a half months selling cannabis.

“Our pricing is set in a manner that helps us cover our costs as an agency,” said David Lobo, vice-president of corporate affairs and social responsibility at OCS.

“Ontarians expect that cannabis operations will pay for themselves and will not be subsidized by the province,” he said, noting that OCS is on track to turn a profit in its first full fiscal year.

Lobo also said OCS has dropped the price on more than 200 products since legalization — 40 of which are oils and capsules.

WATCH: David Lobo explains how the OCS sets its prices

In B.C., where prices are consistently lower, the province’s online store marks up all products, from dried flower to extracts and edibles, at a relatively low flat rate of 15 per cent.

While a lower mark-up sounds better for consumers, it’s making it hard for private retailers to turn a profit, said Unity Whittaker, a buyer for Vancouver’s Village Bloomery.

Since CBC News gathered the data, several provinces say they have lowered the prices of some extracts to improve sales.

Malkani says the legal marketplace is still a budding industry, and these inconsistencies are to be expected.

“I think we are watching in real time the evolution of prices,” he said, as retailers and producers see what consumers want and how much they are willing to spend. Despite the “turmoil” right now pricing should even out relatively soon.

This article was originally published on https://www.cbc.ca/news/canada/toronto/cannabis-extract-oil-capsule-spray-ocs-1.5459516